As a lot of Apple users, I upgraded my OS when Lion became available through AppStore. A lot of UI improvements are noticeable, but also a lot of software upgrade behind the scene.

About UI changes specifically, one can take a look at, e.g. OS X Lion Interface Tweaks, for some pointers. It seems to me that the new windows design (rounded corner, resizable by corner and edge, etc.) now resemble the Fedora look-and-feel I was used to some years ago. I didn’t check, though. Also, most applications can now sit in full-screen mode, together with other applications in standard mode.

Besides, there are some significant software updates.

About C coding, gcc is now symlinked to llvm-gcc-4.2, as part of the Apple developpers’ “effort” to fully integrate LLVM and clang in the OS. That means that there’s no more GNU gcc. The following post is interesting in this respect, OS X Isn’t for Developers. 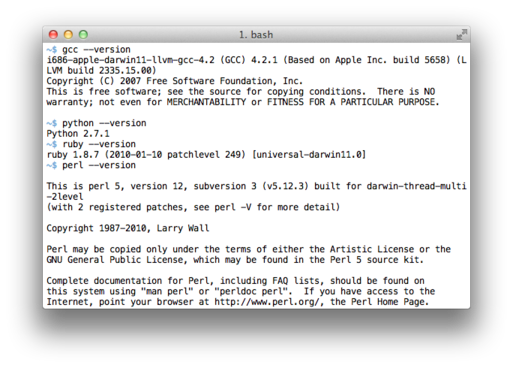 Hopefully, the R software is supposed to compile with llvm, but there’s a lot more to read on the r-sig-mac-request mailing, where a discussion was initiated on March the 10th (and ended 11 days after). I’ve seen a reply by Jan de Leeuw saying R compiles fine with llvm-gcc:

Python has been upgraded to version 2.7.1. This is a good thing, I think, although now I have to update all my packages which installed with Python 2.6. I wasn’t able to recompile scipy, and the default numpy is just 1.5.1. Ok, I guess I have to download everything, including Matplotlib, to get a clean installation. I will do this latter; I still have Enthought Python that is working pretty well.

Most importantly, no more Java as was expected before Lion release. What does it mean? Well, I have a lot of Java-based application, including Weka for data-mining, and here’s what I got after I upgrade OS X:

The following dialog window then popups

but nothing happens. In fact, it is supposed to trigger Software Update to download and install the required Java runtime, but it doesn’t work for me.

I came across some sites providing alternative ways to get Java SDK and the JVM on Lion, e.g. Java 1.5 in OS X Lion, but I’m very sorry to have to do this myself. I wish Apple thought about all Java developpers or users before such a change of course. They provide a link on Apple Support, Java for OS X Lion, to get Java SE 6 version 1.6.0_26. This should have been included among Lion packages, IMO.

Following a thread on StackOverflow, the old path

is now deprecated, and everything now sit in

I also had to manually update Dropbox to get a version compatible with Lion (at least, for getting back the “Copy Public Link” functionality in the Finder). Well, I must admit my previous version was not very up to date.

For the remaining applications, some upgrade are available (e.g., xtorrent, Versions, iTerm2, among others). There are a couple of other minor issues that are easy to solve. For example, I generally resize my screenshots with ImageMagick, which is now broken (it seems to be due to a missing library, libclparser.dylib, in the OpenCL framework). However, GraphicsMagick is still working. Let’s go ahead with it.

but my AucTeX install (which was in /usr/local) has suddenly ceased to work. Why? I know that Aquamacs comes with everything I ever needed, especially the dev branch which includes the new package manager, but I also like using Emacs for the Terminal directly. 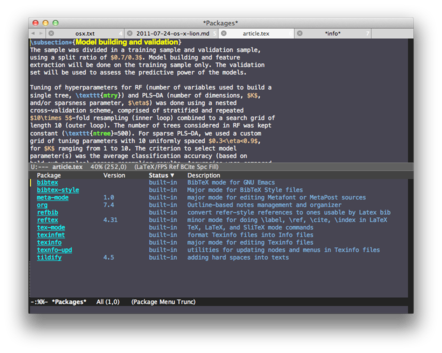 I updated to AucTeX 11.86. It’s not that bad finally as I upgraded my TexLive distribution.