After a fresh upgrade of my Macbook Air with OS X Lion, I’m left with the default system Python, and nothing of my old stuff in the System Library path.

I first tried to install numpy. The default installed version is 1.5.0, I want the latest version. This was quite simple

Other easy install steps: scikit-learn (no dependency, except the above), nose, dexy, ipython.

Actually, I wasn’t able to install scipy, neither with setuptools, nor with a fresh tar.gz archive. To my surprise, however, the installation of Matplotlib went fine! (I remember having to clean a lot of post-install stuff during my previous install on OS X SL.)

Revised approach (that worked for me)

About scipy, a little googling suggests that the problem may be related to a broken numpy install (through either pip or easy_install), where some files are simply missing (e.g., npymath.ini that scipy complains not to found). So, I tried to compile everything the usual way. First, I cleaned up my fresh numpy install:

(Likewise, I had to remove matplotlib and scikit-learn.)

Now, let’s try installing scipy again. Using pip, I still get an error (about some C code). So, I used the tar.gz source files directly, and:

and everything seems to go fine up to the sparse/* stuff where I got error with compilation of veclib_cabi_c.c. This strongly resembles what was described in one of the scipy tickets. It is suggested to just add at the top of scipy/sparse/linalg/eigen/arpack/ARPACK/FWRAPPERS/veclib_cabi_c.c:

Now, there is a new error with scipy/linalg/src/fblaswrap_veclib_c.c that I fixed in the same way. And, ô miracle, everything compiled fine till this end where I could read:

I didn’t run the test suite, though.

To sum up, to get a working installation of numpy, scipy, matplotlib, and all scientific libraries you want,

While we are in, let’s install cython: it went smoothly with easy_install. Finally, I was able to install the scikit-statsmodels which depends on numpy and scipy, but from the pypi tarball only (the automated install via easy_install seems to hang on a broken git revision). I used:

Below is a little check, using %run example_predict.py in IPython 0.10.2: 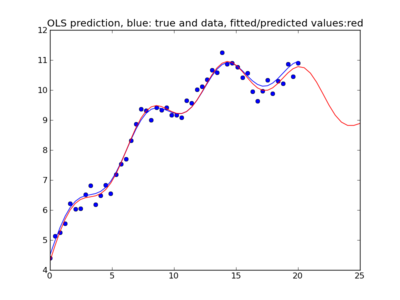 and an illustration with the mean shift algorithm, from the scikit.learn: 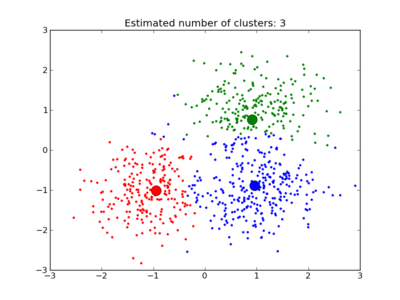